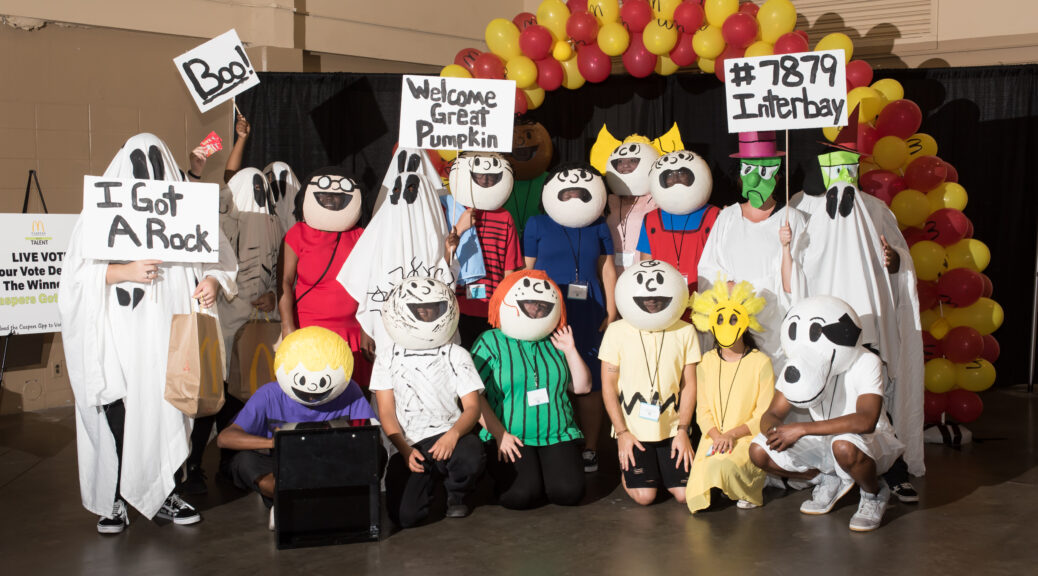 2019 All American Rally
Cash and Prizes Highlight a Great Night

Missing from our calendar for two years, our most popular program is back–the All American Competition. This program allows the best crew people to perfect their skills and be recognized for being outstanding. After the last team competed and the scores tallied, the awards were announced on July 23, 2019 at the Florida Aquarium. The All American program does not end here, though.

Next on the calendar is the All American Crew Rally. On September 15, 2019, over 1,000 Caspers crew and managers gathered to be entertained at the Florida State Fairgrounds Special Events Center for a blow-out extravaganza. Once the doors opened, everyone entered ready to have a great time. Teams arrived in mind- boggling creative costumes, and the teams displays of spirit were deafening. As the first order of business, our people enjoyed great music by our house DJ while chowing down on an amazing taco bar. Even if the rally stopped at the music, food, dancing, and fun, it would probably be enough to have our folks go home happy that they came, but this was only the beginning of the evening.

At 6:00 p.m. our Caspers Got Talent segment began with Briana and Breanna Scott of our #3475 Zephyrhills location. These twins are phenomenal singers whose unique talent kept the crowd entertained. Second up to perform was Matt Magin from restaurant #1099 Tyrone. With his guitar skills and singing voice, he truly wowed the crowd. The third act was Zoe Sabrina Antoinette of our #14492 Valrico location. Zoe had the entire room on their feet! The fourth act was Shanette Lebron, a soulful singer from our #4801 Spruce location. The final act was Brandy Blake who sang a beautiful ballad. Brandy is from our #35651 Pavilion location. Each of the runners up won $200, and Zoe who won the competition took home the $1,000 grand prize.

Next, Blake Casper and Allison Casper Adams announced the Spirit/Costume awards to #14492 Valrico, #5811 Seffner, and #23662 Dakota. Our general managers and their teams delivered a sight to seen with inspired, motivated, creative, and “spirited” people making the task of picking the winners a serious challenge.

Blake and Allison sincerely thanked our hard-working employees for everything they do, not just for All American but the entire year. There is still more fun to come though!

Throughout the next portion of the event many of the crew randomly assigned to their area supervisor’s team were called up to participate in Caspers version of the game Family Feud. Altogether, over twenty-five teams competed.

Teams competed by answering several sets of questions about operations and pop culture. Every three rounds of competition random crew were called to come on stage to choose a “#FastFeelsBetter” envelope containing a special prize. Some prizes were cash up to $1000 and others were Yeti coolers, TVs, Amazon Echo Dots, BlueTooth Speakers, amusement park passes with cash, and a laptop computer. In total, 64 large prizes were given away to excited crew! In each case, the winner’s store crew who were present also received $20 to $100!

This year’s event was one for the books! Everyone enjoyed themselves and many of our crew people left a little richer than they came. Congratulations to all the winners this year. We cannot wait to see you again next year!